In an announcement Feb. 17, the Campaign to TAKE ON HATE received the public support of several members of the Michigan House of Representatives. 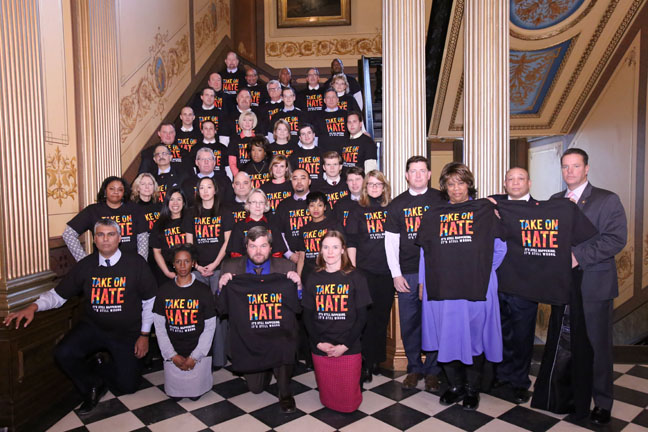 Michigan House members join together at the Capitol on Tuesday, Feb. 17, 2015, to join the #TAKEONHATE campaign to speak out against discrimination against Arab and Muslim Americans.

House Democratic Leader Tim Greimel (D-Auburn Hills), Rep. Stephanie Chang (D-Detroit) and their House colleagues on both sides of the aisle came together at the state Capitol to join the Campaign to TAKE ON HATE – led by the National Network for Arab American Communities (NNAAC), a project of ACCESS – and speak out against hate crimes against Arab and Muslim Americans.

"The Campaign to TAKE ON HATE welcomes the support of the members of the Michigan House.  We are proud of their commitment to stand with us against hate that is resulting in violence and targeting of people because of their faith and ethnicity,” said Nadia Tonova, director of NNAAC.

“We are proud to be from a state that is home to so many Arab and Muslim Americans, and we have welcomed Arab and Muslim refugees into our communities,” Greimel said. “We stand with all Americans, regardless of their ethnicity or religion, and stand against those who preach hate and incite violence.”

Following the killing of three Arab American Muslim students in Chapel Hill, N.C., communities in states across the country, including in Dearborn, have seen more bias attacks against Arab Americans.

“Prejudice and violence has no place in our state and communities, and that is why it is critical that we stand in solidarity today with Michigan’s Arab and Muslim community to take on hate,” said Rep. Chang. “Arab and Muslim Americans are our family members, co-workers, neighbors, friends and community leaders. Today we say loud and clear that we cannot tolerate racism, religious bias and the hatred and violence that they experience.”

Receiving this support is essential to the Campaign. The bias inherently built into standing federal, state and local policy jeopardizes the rights of all Americans, including Muslims and Arabs. TAKE ON HATE aims to change these policies that negatively impact the community while supporting those policies that proactively aid the community.

“We must add our voices to the outcry against these attacks and join with people across Michigan and our country to take on hate,” said Rep. Brian Banks (D-Detroit), Detroit Caucus chairman. “I am proud to stand with my caucus members today to support Arab and Muslim citizens who help make Michigan the great state that it is.”

The Campaign to TAKE ON HATE strives to address issues of bias and discrimination, particularly toward Arab and Muslim Americans, and stands against bigotry towards all people. For more information, visit www.takeonhate.org.