A few weeks ago, Bennett posted on Facebook using his account "State Representative John Bennett" that Christians should be "wary" of Muslim Americans: "The Quran clearly states that non-Muslims should be killed. Arab is the ethnicity, not Muslim or Islam. Be wary of the individuals who claim to be 'Muslim American.' Be especially wary if you are Christian." 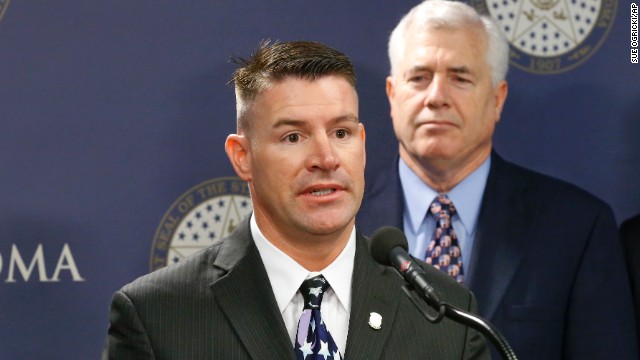 Editor's note: Dean Obeidallah, a former attorney, is a columnist for The Daily Beast and editor of the politics blog "The Dean's Report." He's also the co-director of the documentary "The Muslims Are Coming!" Follow him on Twitter: @TheDeansreport The opinions expressed in this commentary are his.

(CNN) -- As a Muslim American, I didn't think anything could shock me when it comes to anti-Muslim bigotry.

But I have to give it up for Oklahoma state Rep. John Bennett, a Republican, who has set a record for the vilest anti-Muslim comments yet. What makes Bennett's comments so alarming is that they weren't directed against Islamic terrorists such as ISIS, but rather against Muslim Americans, people like my family, friends and me.

A few weeks ago, Bennett posted on Facebook using his account "State Representative John Bennett" that Christians should be "wary" of Muslim Americans: "The Quran clearly states that non-Muslims should be killed. Arab is the ethnicity, not Muslim or Islam. Be wary of the individuals who claim to be 'Muslim American.' Be especially wary if you are Christian."

Despite calls for Bennett to apologize for inciting hate against Muslim Americans, he instead escalated his campaign of bigotry.

On Monday, Bennett held a public forum with more than 100 constituents in a Western Sizzlin' steakhouse in Sallisaw, Oklahoma. There, Bennett provided his supporters with something other than steak -- a big helping of hate.

According to the Sequoyah County Times, Bennett told the audience that Muslims are a "cancer that must be cut out of the American society." He added that the goal of Muslims is "the destruction of Western civilization from within."

But here's where Bennett's comments truly become bone chilling. Bennett, a military veteran, issued what some could interpret as a call to arms: "I'm not advocating violence against anyone ... but I am not going to stand back and allow them to let Islam take over this nation."

So how did the audience at the Western Sizzlin' respond to Bennett's speech? With a standing ovation. How do you explain to a Muslim American child growing up in Oklahoma that a room full of people cheered when an elected official called you a cancer who must be cut out of America?

On Tuesday, Bennett appeared on a local news program to answer questions about his comments. Did he apologize? Nope, instead he doubled down with the remark, "Muslim Americans who subscribe to Islam are just as bad as ISIS."

In reality, Muslim American organizations across the nation, including one in Bennett's own state, have publicly denounced ISIS and condemned their actions as not only being horrific but as also being un-Islamic.

Could Bennett's comments lead to violence against Muslim Americans? I think so. Also sharing my concern is Adam Soltani, the head of the Oklahoma chapter of the Council on American Islamic Relations (CAIR). Soltani explained to me that Bennett's remarks had crossed the line "from inflammatory rhetoric to a call to violence that might incite people who might not know any better."

In fact, Soltani's CAIR chapter has urged the Muslim American community in Oklahoma to take precautions after recent hate crimes were committed against Muslims in New York City.

Now, saying Bennett is simply an anti-Muslim bigot wouldn't be fair. He's so much more.

For example, last month when the shooting of Michael Brown by a Ferguson, Missouri, police officer was in the news, Bennett took to Facebook to express his anger. Was he upset the police shot an unarmed black teenager? Nope, he was livid that the Obama administration had sent representatives to "this thug's funeral" (referring to Michael Brown) and to Nelson Mandela's, but didn't do the same when certain famous white people had died.

Bennett also wrote sarcastically that the police officer who shot Brown could never be innocent because he's a "WHITE COP!" (His capitalization.)

And in July, after a federal appeals court struck down Oklahoma's constitutional amendment barring gay marriage, Bennett stated that he was "angry" with the decision and vowed to fight, "to retake our freedoms from this overreaching federal government." To Bennett, gay Americans having the freedom to marry is somehow depriving him of his own freedom.

The real story though isn't a hateful elected official. We have all seen that before.

The bigger development was the reaction of Oklahoma's religious and social justice groups to Bennett. Instead of dividing the community, Bennett had brought together Christian, Jewish and Muslim groups as well as organizations like the NAACP and the ACLU to stand together at a press conference to denounce Bennett and demand an apology.

Rabbi Vered Harris of Oklahoma City's Temple B'nai Israel told me, "I respect people of all religions, or no religions, who abide by America's core values of tolerance and respect. It's unfortunate that Rep. Bennett does not."

I also spoke with the president of the Oklahoma Chapter of the NAACP, Anthony Douglas, who said it was too late for Bennett to apologize, it was time for him to resign. Douglas, a Vietnam veteran, commented that Bennett is "promoting hatred and possibly even violence against Muslim Americans with his comments and there's simply no place for that from our elected officials."

Bennett is running unopposed in this November's election. However, maybe the good people of his district will write in another candidate to replace him.

Bigotry is a "cancer that must be cut out of the American society." A step towards achieving that dream would be defeating John Bennett on November 4.