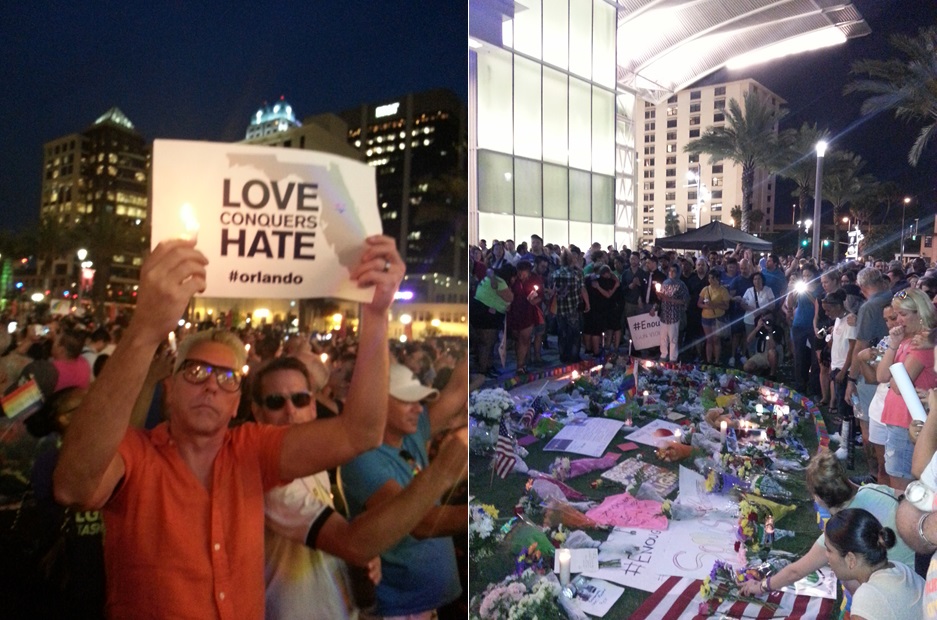 Above: Members of Orlando's Muslim and Arab American communities gathered with more than 10,000 people to show a strong, united front against hate, violence and terrorism at a vigil for Orlando on June 13, 2016.

People across the country are coming together to heal, take a stand against hate and show support for the LGBTQ community following the violent attack in Orlando, Fla. on June 12, 2016, fueled by hate and homophobia, that took away so many innocent lives. (Read the full statement here.)

The Arab American Community Center of Florida (AACC) has been outspoken with their support, encouraging Arab and Muslim Americans to attend vigils, help the victims' families and donate blood.

Mahmoud ElAwadi, AACC Board Vice President, donated blood for the victims and then shared a message of unity (see full Facebook post below) that went viral. He said:

Yes my name is Mahmoud, a proud Muslim American.
Yes I donated blood even though I can't eat or drink anything [be]cause I'm fasting in our holy month Ramadan just like hundreds of other Muslims who donated today here in Orlando.
Yes I'm angry for what happened last night and all the innocent lives we lost.
Yes I'm sad, frustrated and mad that a crazy guy claim[ing] to be a Muslim did that shameful act.
Yes I witnessed the greatness of this country watching thousands of people standing in 92-degree sun waiting on their turn to donate blood even after they were told that the wait time is 5-7 hours.
Yes this is the greatest nation on earth watching people from different ages including kids volunteering to give water, juice, food, umbrellas, sun block. Also watching our old veterans coming to donate and next to them Muslim women in hijab carrying food and water to donors standing in line.
Yes together we will stand against hate, terrorism, extremism and racism.
Yes our blood all look[s] the same so get out there and donate blood cause our fellow American citizens are injured and need our blood.

Yes our community in central Florida is heart broken but let's put our colors, religions, ethnicity, sexual orientation, political views all aside so we can UNITE against those who are trying to hurt us.

We stand with this message of hope and its call for unity against violence and hate. Thank you, Mahmoud ElAwadi, for your outspokenness!