TAKE ON HATE billboard goes up along popular commuter route

For the next couple of months, commuters in southeast Michigan will hear one message loud and clear: to be the difference by joining the movement to TAKE ON HATE.

The billboard featuring the Campaign to TAKE ON HATE went up this month in Dearborn, Mich. and can be seen while heading westbound on Ford Road just after Southfield Freeway on the right.

Spread the word! Share this blog post on social media and snap your own pics of the TAKE ON HATE billboard. 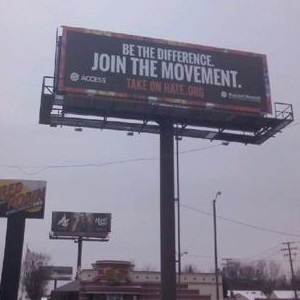 The Campaign to TAKE ON HATE—led by the National Network for Arab American Communities (NNAAC), a program of ACCESS—opposes and stands against hate and bigotry toward all people. TAKE ON HATE is a multi-year, grassroots campaign that strives to address issues of bias and challenges the growing discrimination and persistent misconception of Arab and Muslim Americans, including refugees.