What’s so political about funny Muslims? 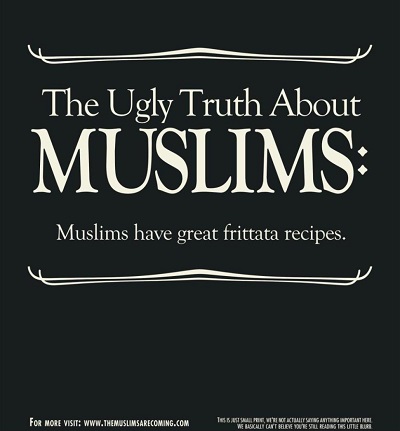 That’s what a culturally conscious comedy duo is asking the Metropolitan Transportation Authority in a federal lawsuit filed Thursday.

The First Amendment federal suit accuses the MTA of tanking the team’s ad campaign right before their posters lampooning Islamophobia were due to hit subway stations April 28. A day later, the MTA banned political viewpoint ads.

To comedians Dean Obeidallah and Negin Farsad, the MTA showed no sense of humor in rejecting their jokes about Muslims’ awesome frittata recipes or silly Muslim “facts.”

“One of our posters says that grown up Muslims can do more push-ups than baby Muslims. I dare you to find the political nature of that ridiculous statement,” Farsad said. “It’s funny, it’s comedic.”

To promote their documentary, “Beware: The Muslims Are Coming,” the pair landed a contract with the MTA to plant 144 posters in 140 subway stations for about a month.