"Muslim groups and leaders are constantly denouncing terrorism, but most Americans simply never see it. Answer? Make sure they see it." 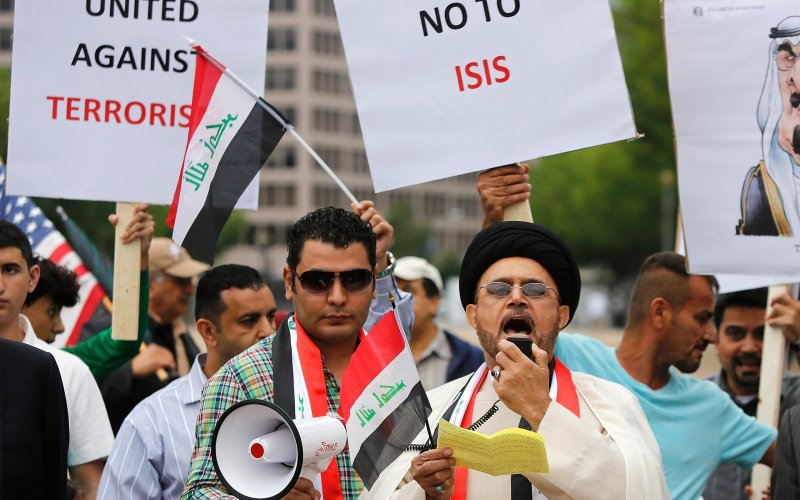 Here we go again. Another so-called Islamic terrorist group, ISIS, is committing horrific atrocities. And Muslims are again called upon to denounce them.

How can anyone believe that small groups of terrorists accurately represent Islam or Muslims worldwide? If, let’s say, half of the 1.5 billion Muslims in the world were killing innocent people like ISIS is, it would be pretty hard for me to deny that those actions represent the faith on some level.

But we don’t see that. What do we see? ISIS slaughtering Muslims on a daily basis. ISIS is also despicably attacking Christians and of course the Yazidis, but the reality is that over the past five years, close to 90 percent of the victims of these “Islamic” terrorists are Muslims. ISIS even killed a Muslim professor in Iraq who publicly opposed the group’s persecution of Christians. Denounce them? I need to be protected from them.

Despite this reality, I, along with Muslims worldwide, have consistently condemned terrorism over the years waged in the name of Islam. We saw this after the 2013 Boston marathon bombing, as Muslims leaders across the United States spoke out. A few months ago, when Boko Haram kidnapped the young girls in Nigeria, Muslims again universally denounced their action, calling them “blasphemous” for claiming their actions were based on the tenets of Islam.

And once again with ISIS we have seen universal condemnation by Muslims leaders in the United States and abroad. For example, the two biggest Muslim-American groups, ISNA and CAIR, unequivocally denounced ISIS. CAIR’s statement notes in part: “American Muslims view the actions of ISIS as un-Islamic and morally repugnant. No religion condones the murder of civilians, the beheading of religious scholars or the desecration of houses of worship.”

In the United Kingdom, 100 Sunni and Shiite Imams have joined together to condemn ISIS. Muslim leaders in Indonesia and Turkey did the same. And the head of the Arab League stated that the league “strongly denounced” ISIS and its attacks on Christians in Iraq.

Despite this avalanche of condemnations, it’s clearly not reaching—or not persuading—many of my fellow Americans. In fact, a Zogby poll released just last month found alarmingly that the favorability ratings for Muslims in the United States had fallen from 36 percent in 2010 to 27 percent.

This is distressing but understandable. When people see only negative images of Muslims in the media, they will naturally believe the worst. Compounding this problem is that Muslims are small minority group in the United States, totaling about 2 percent of our population. Indeed, a July Pew poll found that only 38 percent of Americans personally knew a Muslim. This lack of exposure also contributes to the negative views of Muslims because people don’t have personal experiences to offset the negative media images.

This brings me to a question I often ask myself: What can we do to reach out to more of our fellow Americans to make it clear we despise these terrorists and they don’t represent Islam?

There’s no easy answer. And this issue is made more complicated by the fact that within the American Muslim community there’s a difference of opinion on how to approach it. Some say we should publicly increase condemnations of the terrorists. Other say we already have, so what can we do more? Another faction says why should we denounce people who we have zero connection with? We don’t call on other religious groups in the United States to denounce their worst examples.

My suggestion is a multi-faceted approach. One is increasing the interfaith work that many in our community employ in hopes of reaching more people of other faiths. I’d love to start an “Adopt a Muslim” program so everyone can have a Muslim friend!

But my experiences lead me to believe that the key is the media. It possesses the power to both humanize and demonize minority groups. Plus, it enables smaller minority groups to share their own story on their own terms with millions of people across the country.

In fact, on Monday, I witnessed firsthand the power of an increased presence of Muslims in our media. A friend of mine, Rick Ungar, was guest-hosting the SirusXM radio show “Stand up with Pete Dominick,” on which I frequently appear and sometimes guest-host. During the show, Ungar commented, in a well-intentioned manner, that he didn’t see enough Muslims denouncing terrorism.

After his statement, he received immediate pushback on Twitter from listeners who had heard me and other Muslim guests on the show denouncing terrorism numerous times in the past. A few minutes later, Ungar reached out to me to call in to the show. I did, and we again discussed the efforts and struggles of Muslims in denouncing terrorism effectively. But if Muslims had not in the past been guests on that show, Unger’s statement would likely have gone unchallenged, further perpetuating the narrative that Muslims are not speaking out.

To me, it’s simple: The more American-Muslims in the media, the more people will see that Muslims are frankly like most other Americans.  We simply want to raise our families, keep our jobs, take a summer vacation, and if lucky, put away a little money each year.

Now comes the hard part: How to convince media outlets to be more inclusive when it comes to Muslim-Americans? Some already have been very embracing, especially online media publications that have made it a priority to present diverse voices because it yields content that’s both more nuanced and distinctive. But on TV news, both network and cable, there are few Muslims who are a regular part of that media landscape. Take a moment and count the Muslim anchors or Muslim network contributors you’ve seen. (That shouldn’t take long.)

I’m hopeful we will see changes in the near future because there are now more American Muslims working in the media than ever before. Until then, I will continue to do my part by vocally denouncing those who claim they are acting in the name of my faith. Not because I think they in any way represent Islam or because I think it will make my life easier. I do it because I don’t want the next generation of American-Muslims to grow up in a country where they are discriminated against or viewed as less than fully American simply because of their faith.

Dean Obeidallah is a former lawyer turned political comedian and writer.  He is a frequent commentator on various cable-news networks. He has also appeared on Comedy Central’s “Axis of Evil” Special, ABC’s “The View” and he co-directed the comedy documentary, “The Muslims Are Coming!”  His blog is The Dean’s Report.

Full story from The Daily Beast.