Deepa Iyer: 'Why All Communities of Color Must Demand an End to Police Brutality' (From The Nation)

"For Latinos and Asian- and Arab-Americans, Ferguson is our fight too." 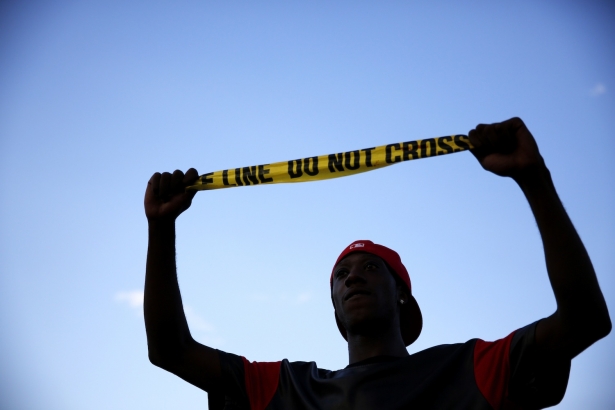 The images out of Ferguson, Missouri, these past two weeks have been shocking: tear gas blanketing suburban streets, law enforcement creating a war zone and defiant protesters braving it all. But it is important to remember that what started Ferguson’s fight is far too common: the police killing of an unarmed black teen.

African-Americans are the primary targets of law-enforcement profiling and violence, as the killings of Oscar Grant, Sean Bell, Jonathan Ferrell and Eric Garner all attest. But during this past week, Latino, Asian-American, Arab-American and Muslim organizations have all released statements of solidarity informed by similar experiences with discriminatory law enforcement practices, as well as an urgency to collectively identify and implement solutions.

In fact, Latinos and Asian- and Arab-Americans have a critical stake in reforming discriminatory police practices. While African-Americans in Ferguson must remain the primary voices and decision-makers calling for action to address the murder of Michael Brown, other communities of color can and must join Ferguson’s fight by linking the impact of racially motivated policing with the structural racial inequities that exacerbate it.

Latinos and Asian and Arab-Americans are no strangers to police violence and profiling based on skin color, accent, language, immigration status and faith. For example, Fong Lee, the 19-year-old son of Laotian refugees, was shot and killed by a police officer as he was riding his bike home from school in Minneapolis in 2006. For years, Latinos, along with African-Americans, have been the disproportionate targets of the New York Police Department’s “stop-and-frisk” tactic. And Muslim, South Asian and Arab-American communities have experienced ongoingsurveillance in mosques and student associations, all in the name of national security.

In their ongoing war on undocumented immigration, federal and state law enforcement agencies have been accused of engaging in rampant profiling of Latino and Asian-American communities. Federal programs such as Secure Communities and “Show Me Your Papers” laws enacted in Arizona, Alabama, Georgia, Indiana, South Carolina and Utah have led to stops and detentions of people based on their accents or skin color, and deepened both documented and undocumented immigrants’ fears of engaging with law enforcement.

When law enforcement trample on the rights of any group, we must all resist: the oppressive, militarized tactics on display in Ferguson have undermined people’s basic rights to peaceful assembly and movement, and it’s not the first time. For Asian-Americans, the curfew that caused so much unnecessary violence in Ferguson over the weekend was reminiscent of the “enemy alien curfews” that restricted the movements of Japanese-Americans, as well as German, Italian and Japanese noncitizens, during World War II—also imposed for reasons ostensibly related to public safety. The military-grade hardware we’ve seen on the streets of Ferguson has also been deployed by law enforcement in border cities in California, Texas and Arizona, where reports of racial profiling, harassment and deaths of Latinos seeking refuge in the United States have been occurring for decades now.

How can we fight back against police brutality and profiling? To start with, we can push for concrete solutions already proposed by communities of color, such as requiring police to wear cameras, ensuring police accountability through the legal system, documenting police stops, ending racial and religious profiling, providing culturally and linguistically appropriate trainings for law enforcement that reflect the communities they serve, instituting diverse recruitment and hiring practices, and abiding by the concepts of community policing based on mutual trust and respect. Coalitions such as Communities United for Police Reform in New York City provide hopeful examples of how organizing black, brown and interfaith communities can lead tolegislative victories that maintain public safety, civil rights and police accountability.

But police brutality is just one symptom of this country’s larger structural racism, which segregates our schools and cities, increases the poverty and unemployment rates for people of color, has psychological consequences for families and young people, and decreases our life expectancy. African-Americans disproportionately bear the brunt of this structural racism, but it affects many immigrants and other minorities as well. In order to transform our communities, all people of color must find common cause in each other’s movements. We can only end racial injustice through strategic multiracial alliances at the local and national levels that are informed by an understanding of our connected histories, and through working within our constituencies to address anti-black racism and stereotypes about one another.

We can and must start with Ferguson.

Deepa Iyer is the former director of South Asian Americans Leading Together (SAALT), and she is currently working on a book about the changing American racial landscape. She serves on the Board of Directors of Race Forward. Find her at www.deepaiyer.me and @dviyer on Twitter.

Full story from The Nation.