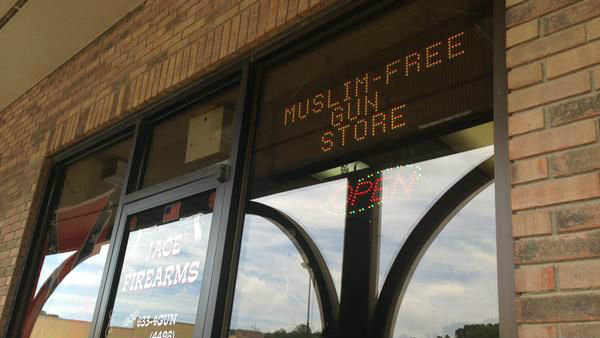 Today the National Network for Arab American Communities (NNAAC), of which the Campaign to TAKE ON HATE is a project, was among 82 civil liberties, human rights, immigrant rights, faith and cultural organizations (see list of signatories below) to send a letter to Attorney General Loretta Lynch asking her to investigate the growing phenomena of so-called “Muslim-free zone” businesses nationwide.

The coalition requested that the DOJ Civil Rights Division’s Housing and Civil Enforcement Section conduct a full federal investigation into all businesses that have declared themselves as “Muslim-free zones” and “bring civil enforcement proceedings against business owners who have violated the law.”

Businesses in Arkansas, Florida, Kentucky, New York, Oklahoma and New Hampshire have publicly declared themselves “Muslim-free.” Despite these reports, the DOJ has remained silent, with the exception of a pledge to “monitor” the Arkansas “Muslim-free zone” business.

The coalition also requested a meeting to further discuss "the civil rights impact of these bans and how [it] can best engage with the DOJ plans to address current and future discriminatory exclusions by public accommodations.”

The letter compared “Muslim Free Zones” to “whites only,” “No Dogs, No Jews,” “No Mexicans,” and “Irish Need Not Apply” signs that were posted during past shameful periods of our nation’s history.