Tell Congress to #RepealTheBan and Support the No Ban Act 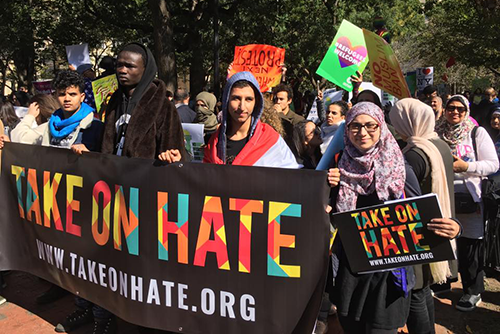 A new bill—the NO BAN Act—introduced by Senator Chris Coons and Congresswoman Judy Chu, would not just repeal Trump’s Muslim, asylum, and refugees bans—it would limit the ability for this administration or any post-Trump administration to do something like it ever again.

We need to send a strong message that our communities and allies will stand together and fight back in the face of hatred and bigotry.

Please sign this petition to make sure your representatives are on board.

But the NO BAN Act is not just another minor variation.

It’s fundamentally different, and possibly a game changer if we can get it rolling strong out the gate. Here’s why:

This is the first major piece of legislation that doesn’t just take aim at the Trump administration’s Muslim Ban, but at preventing any future president from walking in Trump’s footsteps.

In the wake of white nationalist violence threatening our communities every day, we demand real, concrete action.

We demand that Congress not just repeal Trump’s Muslim Ban, but limit the ability of future administrations to ban people based on their religion or where they come from. Join us now.

In a society already plagued by white supremacy, Islamophobia, and anti-Blackness, political leaders like Donald Trump have created the necessary political and cultural environment for the horrific, deadly violence we’ve seen in recent months and years.

We can see this clearly in the fact that nearly all of Trump's signature policies are specifically aimed at keeping Black and brown people out of the U.S.

Whether it’s the Muslim Ban, the racist border wall, detention camps, or ICE raids, this agenda is straight out of the white nationalist playbook—in fact, many of these policies were directly or indirectly influenced by anti-Muslim and anti-immigrant hate groups.1,2

Now, #AfterChristchurch, we can’t afford to do anything less than prevent any future President from stoking this kind of hate ever again.