The time to stop police crimes is now. The Campaign to TAKE ON HATE and the Arab American Action Network (AAAN) will rally in downtown Chicago on Saturday, Aug. 29 for a demonstration of Arab solidarity with the #BlackLivesMatter movement. 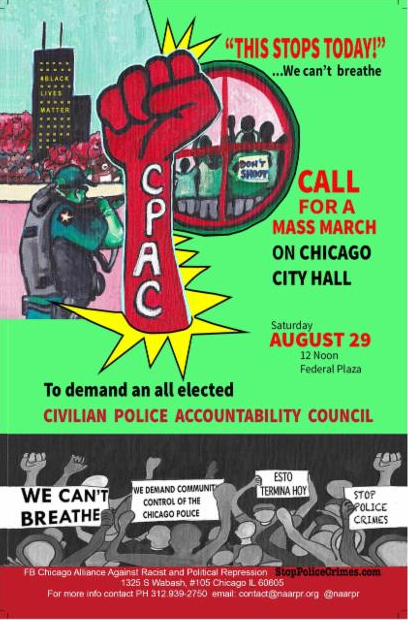 Thousands of Chicagoans and others from across the country are expected to rally and march against police violence and in support of the Civilian Police Accountability Council (CPAC).  It will be one of the largest Chicago gatherings for police accountability and against police crimes in many years, specifically to #StopPoliceCrimes and #EnactCPAC.

RISE UP FOR CPAC: Civilian Police Accountability Council
Learn more specifics about why we want and need CPAC in Chicago

TAKE ON HATE and the AAAN are calling on all Arabs and supporters to join this historic effort, led by the Chicago Alliance Against Racist and Political Repression (CAARPR).


Please email [email protected] if you would like to join the march!