The Campaign to TAKE ON HATE urges universities to take immediate action so that the consequences of showing the film American Sniper, known to have incited hatred toward Muslim and Arab Americans, do not cause harm to any student.

After the movie was released last year, some people posted abhorrent remarks like: “If American Sniper doesn't make you wanna [sic] go kill some towel headed goat lovers I don't know what will.”

Recently, several public universities have chosen to screen the film on their campuses. Students at the University of Michigan, Ann Arbor started a petition to have its screening postponed because of their rightful concerns about its anti-Muslim and anti-Arab propaganda and so that a panel focused on reflection and discussion could be included. The university initially agreed to that and said that the film would be shown at an undetermined date with a panel. However, university officials went back on their decision and reinstated the screening.

Following the request to postpone the screening, students received these and other messages of hate: 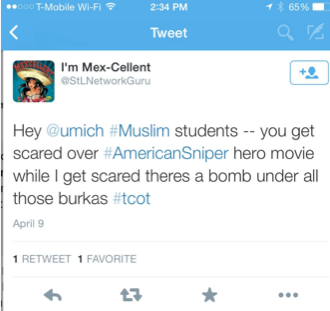 Courtesy of UM Got (hate) Mail

Wayne State University (WSU) in Detroit, Mich. also planned to screen the film this week. However, after a student-led petition requested the university to reconsider its decision, the film screening has been rescheduled to next week with a pre- and post-film faculty led discussion.

The Campaign to TAKE ON HATE calls upon the University of Michigan and all universities showing the film to heighten their security and protection of those in the student population who are Muslim or Arab, as well as anyone who may feel threatened by the depictions in this movie. Universities that choose to hold a screening must follow WSU’s example and provide context to the film with moderated discussions.

"It is the ultimate responsibility of our public institutions to protect their student community and foster a safe environment for all. By showing this movie, we are concerned that Muslim and Arab students will be targeted and threatened. The liability of showing this film is on the university officials who make that decision and it is up to them to take appropriate measures,” said Nadia Tonova, Director of the National Network for Arab American Communities (NNAAC), which leads the Campaign.